Names and appellations in the Quran

The name Muhammad (/mʊˈhæməd, -ˈhɑːməd/)[24] means "praiseworthy" and appears four times in the Quran.[25] The Quran addresses Muhammad in the second person by his various appellations; prophet, messenger, servant of God ('abd), announcer (bashir)[Quran], witness (shahid),[Quran] bearer of good tidings (mubashshir), warner (nathir),[Quran] reminder (mudhakkir),[Quran] one who calls [unto God] (dā‘ī),[Quran] light personified (noor)[Quran], and the light-giving lamp (siraj munir)[Quran]. Muhammad is sometimes addressed by designations deriving from his state at the time of the address: thus he is referred to as the enwrapped (al-muzzammil) in Quran and the shrouded (al-muddaththir) in Quran.[26] In Sura Al-Ahzab God singles out Muhammad as the "Seal of the Prophets", or the last of the prophets.[27] The Quran also refers to Muhammad as Aḥmad "more praiseworthy" (Arabic: أحمد‎, Sura As-Saff). 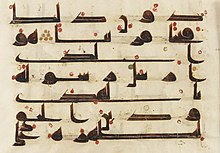 The Quran is the central religious text of Islam. Muslims believe that it represents the words of God revealed to Muhammad through the archangel Gabriel.[28][29][30]

Although it mentions Muhammad directly only four times,[31][Quran][Quran[Quran][Quran]there are verses which can be interpreted as allusions to Muhammad's life.[14][n 4] The Quran, however, provides minimal assistance for Muhammad's chronological biography; most verses in the Quran do not provide much in the way of historical context.[32][33]

An important source may be found in the historic works by writers of the 2nd and 3rd centuries of the Muslim era (AH – 8th and 9th century CE).[34] These include the traditional Muslim biographies of Muhammad (the sira literature), which provide additional information about Muhammad's life.[35]

The earliest surviving written sira (biographies of Muhammad and quotes attributed to him) is Ibn Ishaq's Life of God's Messenger written c. 767 CE (150 AH). Although the work was lost, this sira was used verbatim at great length by Ibn Hisham and Al-Tabari.[36][37] Another early history source is the history of Muhammad's campaigns by al-Waqidi (death 207 of Muslim era), and the workof his secretary Ibn Sa'd al-Baghdadi (death 230 of Muslim era).[34]

Many scholars accept the accuracy of the earliest biographies, though their accuracy is unascertainable.[36] Recent studies have led scholars to distinguish between the traditions touching legal matters and the purely historical ones. In the former sphere, traditions could have been subject to invention while in the latter sphere, aside from exceptional cases, the material may have been only subject to "tendential shaping".[38]

Another important source may be found in the hadith collections, which are accounts of the verbal and physical teachings and traditions of Muhammad that were compiled several generations after his death by notable individuals such as Muhammad al-Bukhari, Muslim ibn al-Hajjaj, Muhammad ibn Isa at-Tirmidhi, etc.[39]

Some Western academics cautiously view the hadith collections as accurate historical sources.[39] Scholars such as Madelung do not reject the narrations which have been compiled in later periods, but judge them in the context of history and on the basis of their compatibility with the events and figures.[40]